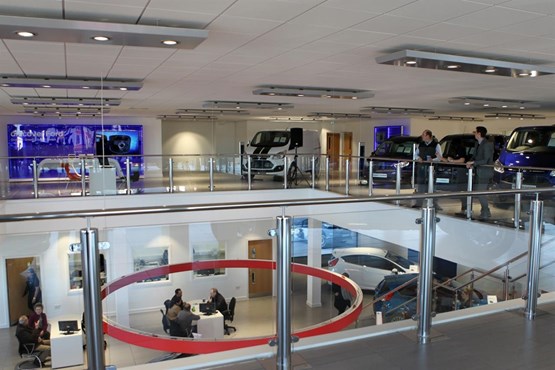 More than a thousand people turned out for the opening of car dealer group Sandicliffe’s new Ford Store in Leicester.

The Welford Road store is the first of its kind in the Midlands.

Sandicliffe has invested £1.5 million in the new Ford Store which mirrors similar dealerships in Spain and Germany.

Featuring a new car and commercial vehicle showroom over two floors, a parts and servicing centre and a wide choice of used cars, the building is a brand new concept for Ford in the UK.

Reg Tutt, Sandicliffe managing director, said: “Over the last year we’ve made a significant investment in our Leicester site to create the Ford Store; a totally new car buying concept."

It is one of the first such centres in the UK and gives customers an interactive experience.

“For example, buyers can customise their car using tablet technology and see the finished model on a huge screen. The different ‘zones’ in the centre showcase different makes and models and there are plenty of interactive ways for customers to see what a new Ford can do for them.”

The launch weekend featured a range of events including guests from Leicester City football and Leicester Tigers, as well as 1,200 members of the public.

Senior figures from Ford were also in attendance.

Andy Barratt, Ford of Britain’s sales director, called the new Sandicliffe Ford Store “simply the most impressive Ford dealership I have ever visited.”

Tutt: “It has taken a year or so for us to develop and build this stunning new Ford Store and the end result is a totally new car-buying experience. Both our customers and our staff have been extremely patient over the last few months and I’d like to thank them for their understanding during the improvements."

Nigel Falkiner, head of marketing for Sandicliffe, said: “As well as the new Ford Store opening its doors, our message was also about getting across Ford’s new technology across the entire range. In addition, we also launched the all-new Focus, the all-new Mondeo and the first look of our new hi-tech indoor Transit Centre, one of only a few in the UK."

Sandicliffe was formed on Nottingham Road, Stapleford in 1948. From its 10 locations across Nottingham, Leicester, Loughborough and Melton Mowbray, it represents New Ford, Mazda, Kia, Skoda and Nissan.