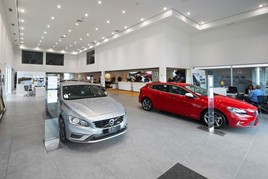 Marshall Motor Holdings has today completed the takeover of the Derby Volvo franchise from Vertu Motors.

It has relocated the business from Sir Frank Whittle Road to Stadium View at Derby's Pride Park, in a site previously occupied by a Land Rover business before that was relocated by Inchcape.

In a statement for customers, Marshall said: "Don’t worry – it’s not all change. The excellent staff, standards and values will remain the same, ensuring that you receive consistently high levels of service and value-for-money. Marshall Volvo Derby are firmly here with you for the road ahead."

The imminent acquisition was revealed by Marshall earlier this week when it announced its takeover of six Volkswagen car dealerships, a Volkswagen Van Centre, bodyshop and a Skoda dealership from Jardine Motors Group.

It is the latest in a number of changes of ownership within the Volvo Car UK network in the past 24 months, as the Swedish brand consolidated its franchised outlets.

The Volvo network is investing in the VRE showroom style currently, which emphasises the Swedish heritage of the brand.