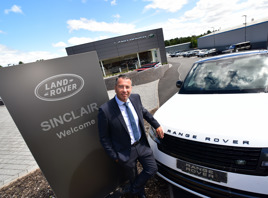 Sinclair Group has made its first move into England and added two Land Rover dealerships and its first Hyundai franchise through the acquisition of Shukers.

The deal sees the South Wales AM100 car retail group – profiled by AM back in 2019 – broaden its Welsh territory with Land Rover and Hyundai dealerships in Aberystwyth while crossing the border into England with ownership of the Land Rover franchise in Ludlow.

The £50.2 million turnover (2021) Shukers Group, which was acquired from Rubery Owen Group, will transfer its 50 staff to Sinclair in a move that takes its workforce to 900 employees representing 10 brands in 24 locations.

Sinclair Group managing director Andy Sinclair said Shukers as a well-established, family business with a similar culture and core values to his business, describing its addition as a “great fit”.

He added: “The Jaguar Land Rover (JLR) brand is extremely strong in the UK and is already an important part of our group. The addition of two very successful Land Rover sites will significantly increase our territory for the brand and will double the points of representation we have following our takeover of retailers in Swansea and Brecon since 2018.”

Sinclair added: “The opportunity to represent Hyundai for the first time is equally exciting, especially with its reputation for being so progressive on the electric vehicle front.

“The Hyundai product line-up is expanding rapidly so it’s a brilliant time to be involved with the brand as it will enable us to offer something very different to our current portfolio and presents our customers with even more choice.”

Sinclair has promoted Nicky Boyce to the post of head of franchise for Jaguar Land Rover and Hyundai following the acquisition of the Shukers businesses.

Boyce, who is celebrating his 10th anniversary with the company, said that he looked forward to “building on the success and reputation achieved by our two existing Land Rover operations in the past two years” in his new role.

Rubery Owen Group chief executive Richard Jenkins said: “The future of the UK motor retail environment will face a lot of change in the coming years with the move to electrification and the increasing importance of online sales.

“To take advantage of all the opportunities these changes present, we believe that Shukers will be better placed being part of a much bigger family company that is purely focused on the motor retail sector.

“The board and shareholders agreed that a buyer would be found based on being the best ‘home’ for our team and our business and we believe that the Sinclair Group is most like Rubery Owen in style and values.”

Joe Barney, head of business at Shukers, added: “We are delighted to be joining the Sinclair Group, both teams in Ludlow and Aberystwyth are looking forward to further developing and growing the businesses into the future.

“We are committed to delivering the same high levels of customer service through the same outstanding teams under our new name.”

David Kendrick, head of automotive at UHY Hacker Young, who advised the shareholders of Shukers on the sale said: “It has been a very interesting few years for Shukers, having sold Shrewsbury Land Rover initially and then purchasing the Aberystwyth Landrover and Hyundai business a short while after.

"This sale to Sinclair makes absolute sense as it links very nicely with their existing Ross On Wye dealership, creating a strong market area. I have no doubt the business will continue to grow and flourish under their new ownership.”