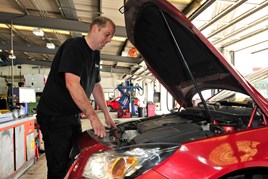 The last six months have seen a small increase in the number of drivers choosing to have their cars serviced at a franchised dealer instead of an independent garage.

The objectives of the survey were to explore current consumer perceptions of franchised dealers and their competitors as well as understand consumer aftersales behaviour.

The survey showed that over the past six months there has been a 2% increase in the number of people using franchised dealers for aftersales compared to a 3% decrease for independent garages.

That figure increases when analysing consumers who have had their car serviced in the past six months.

Of those people who have had their car serviced in the past six months the number of consumers who are using aftersales jumps from 42% in January to 48% today.

What this demonstrates is that when a consumer uses a franchised dealer for aftersales they are more likely to continue doing so in the future, the NFDA says.

Sue Robinson, NFDA director, said: “The survey has demonstrated that consumers are pleased with the quality of aftersales at franchised dealers.

“The increase in the number of consumers using franchised dealerships demonstrates that service plans and good customer service have led to greater customer numbers.

“Our members will continue to improve their aftersales offering and guarantee that the franchised dealers are always seen as the best place for aftersales.”

The Consumer Attitude Survey was commissioned by the National Franchised Dealers Association (NFDA) and carried out by market research agency Public Knowledge.

The survey polled 1,000 UK consumers in a 15 minute online survey. Public Knowledge considers the results statistically significant with a confidence level of more than 99%.

> The NFDA Consumer Attitude Survey will be repeated every six months in order to track trends in consumer views.