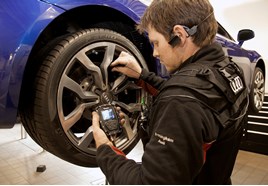 Franchised networks and carmakers need to do a better job at making consumers aware of the expertise and varied services available at dealers' workshops.

The National Franchised Dealers Association has revealed the findings of research aimed to help authorised repairers understand how they are viewed against independents and fast-fits.

It commissioned market research agency Public Knowledge to poll 1,000 UK consumers, split into equal thirds between those who use a franchised dealer, an independent, and who use both.

The findings of the first NFDA Consumer Attitude Survey include the key point that convenience is the main factor affecting the consumers’ aftersales-booking decision. Of the 1,000 surveyed, 45% said it was ‘very convenient’ to use an independent, compared with only 26% who described franchised dealers similarly.

“Perhaps what the franchised dealer considers to be convenient actually isn’t convenient in the minds of the consumer,” states the report.

The study found that there’s a perception that services such as tyre replacement aren’t available at franchised dealers.

Sue Robinson, NFDA director, said consumers are able to drive into a national independent chain, and get what they need while they wait, and they cannot generally do so with most franchised dealers.

“When consumers do drive up and its an emergency franchised dealers will make time for them, but I know that because I’m in the industry, and it’s not in the consumers’ thinking to do that.”

She conceded that franchised dealer networks are not currently structured to encourage drop-in business, because of their overheads and profitability pressures which encourage service managers to keep the workshops booked up well in advance. Few can be brave enough to allocate a quarter of their daily workshop hours to drop-in business.

Their concentration on new car sales, and their ability to control much of their franchisees’ profitability, may be at the detriment of the franchised networks’ aftersales operations.

“There’s a big marketing job to do.”

The NFDA Consumer Attitude Survey will be repeated every six months in order to track trends in consumer views.