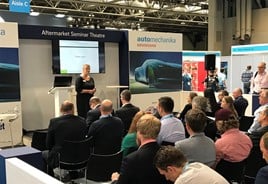 Legislation must prevent car manufacturers from monopolising access to connected car data in a bid to protect the ‘livelihood of the aftermarket’, says IAAF chief executive Wendy Williamson.

Addressing an audience at the recent Automechanika expo at the NEC in Birmingham, Wendy Williamson voiced her fears for the future of the sector and said that it was imperative for the aftermarket sector to “keep up to date with the times”.

Independent Automotive Aftermarket Federation (IAAF) boss Williamson said that it was not the sector’s intention to lure motorists away from the franchised dealer networks, but said that it was imperative that OEMs allowed third-party providers to continue providing choice to consumers.

Addressing the risk posed by connected cars, she said: “The big challenge with autonomous vehicles will be access to information to repair them.

“Undoubtedly the vehicles manufacturers want to have all the access to these vehicles through their own servers, their interface, using their log-ins. This threatens the very livelihood of the aftermarket as (under these circumstances) we would rely on VMs to give us access to a vehicles data in a timeframe they determined.”

She added: “We need to be able to continue doing what we’ve always done in giving customers choice to have their vehicles serviced where they want and when they want, by whoever they want.”

Williamson said that the IAAF has started its ‘Your Car, Your Choice’ campaign in a bid to reiterate this need for choice.

Also in her speech, Williamson covered the changing face of UK parts distribution, legislation and how lifestyle changes will affect the trade in the future.

The speech revisited Type Approval, an ongoing theme of IAAF’s lobbying activities for the past three years.

Williamson said IAAF has “fought hard to ensure a number of key amendments were included in the final legislation,” which was approved last month by the European Parliament.

Williamson paid tribute to MEP Daniel Dalton who was instrumental in getting the legislation through the EU Commission, Council and Parliament.

She said: “Daniel took the time and trouble to understand our sector in great detail and ensure that our viewpoint was taken into consideration.”

Brexit was also a factor in the speech, with Williamson reminding delegates that all EU legislation will be adopted in the UK as of March next year, but as Type Approval legislation doesn’t take effect until September 2020, “it now throws up a question of where this legislation now sits.”

In a speech there was also some key information on the rise of new technologies such as electric vehicles and challenges regarding emissions.

“The aftermarket has been relatively slow to respond to some of the newer technologies, but many independent garages are ‘gearing up’ to embrace the hybrid vehicle parc.”

Driving all these changes is lifestyle and consumer expectations Williamson said: “Ownership of vehicles will change; renting vehicles by the day or even the hour will become more popular, particular among the younger generation.

“We as a sector need to ensure we keep up to date with the times. “We must continue to invest in tools, equipment, people and of course training to ensure we’re able to cope with the myriad of changes that are taking place in the automotive industry.

“We have a reputation for finding a way through – the threats are more complex but we’re certainly up for the challenge.”