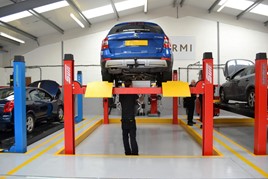 Car MoT failure rates have fallen (rather than risen) since new, more stringent rules came into force on May 20, 2018.

Motorway.co.uk, the car buying comparison website, obtained data from the DVSA through a Freedom of Information (FOI) request.

The request asked for the total number of MoT tests, fail and pass rates, every month since January 2017. The data was obtained to see if tougher rules had increased failure rates, but actually revealed the opposite.

The average fail rate across June, July and August 2017 was 35%, almost 1% higher than the corresponding months this year.

August 2018 saw the second lowest monthly fail rate this year and the fourth lowest since the start of 2017, with just 33.4% of cars failing their MoT.

With all cars on the road requiring MoT after three years, this lower monthly fail rate could be put down to a higher percentage of newer cars being on the road that were purchased 2014-15, that required an MoT for the first time (reaching three years of age).

Although, looking at actual test numbers, there were 1,679,965 MoT tests from May 1-19, and 986,178 tests over the rest of the month, which indicates that car owners were keen to get their cars tested before the new rules came into force on May 20.

The new MoT rules include changes to how defects are categorised, stricter rules around diesel car emissions and additional items checked during the MoT such as whether tyres are under-inflated or any signs of brake fluid contamination or leakage.

“Other than 2014 and 2015 being very strong years for new car sales and these new cars needing an MoT for the first time, there’s no clear evidence to explain why rates have fallen in 2018 and it might just be a coincidence.

“However, it could also reveal a lot about the time most garages allocate for tests and the tight profit margins they are operating under.”

Buttle said the new tests are now more stringent and time consuming - especially for diesels, yet there has been no tangible increase in MoT prices across the UK since May 2018.

The maximum fee garages can legally charge for an MoT test is £54.85 and many charge less than that to attract customers.

A longer list of things to check on each car equals longer tests and that could be putting pressure on the bottom line.

He said: “It’s very hard to pin the reasons for the MoT failure rate fall on any particular thing, but if a garage spends more time on some cars, they may need to make up the time by ‘waving through’ other cars with issues that under the previous rules might have failed.

“Time is money and tougher tests mean less time for everything on the longer list. There were always going to be knock on effects.”