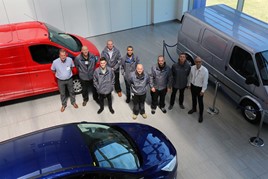 Autotech Recruit has highlighted the automotive sectors' aftersales skills shortage in celebrating the growth of its Manufacturer Led Programme (MLP) for temporary staffing.

The recruitment agency's Manufacturer Led Programme (MLP) was launched in 2018 to meet growing demand from car manufacturers to tap into the company's network of over 450 vetted, temporary vehicle technicians.

And the buisiness has reveqaled that almost 95,000 workshop hours have been filled within franchise dealer networks  bty the 120 temporary vehicle technicians who have completed manufacturer-specific training under MLP.

Last year, 65,000 hours of work were filled by Autotech Recruit’s non MLP temporary vehicle technicians and in 2018, 25,000 hours were filled.

The company said this demonstrates the growing reliance automotive businesses have on contractors to cover short term labour gaps.

“Dealership workshops are no different from independent garages in this respect - they still need to recruit vehicle technicians to ensure they are running at optimum capacity.”

AM featured AutoTech Recruit in a 10 minutes with... Gavin White, managing director at Autotech Recruit earlier this year.

Autotech claims that MLP has helped save dealerships close to £11m in potential lost revenue.

As part of MLP, temporary vehicle technicians are trained to the specific brand standards at the manufacturer’s dedicated training facilities.

Since its launch, 10% of vehicle technicians trained under the programme have been offered permanent positions, said Autotech Recruit.

King said: “It is vital that skilled vehicle technicians are not lost to other industries.

“We invest heavily in our contractors to ensure they are trained to the highest level so we can provide the best solution to our clients.

“This not only ensures the industry can meet growing demand efficiently, but also safeguards the career of vehicle technicians.”