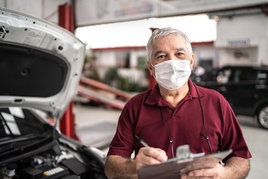 The number of cars expected to fail their MOT test in 2021 has increased, according to a new survey by the Motor Ombudsman.

The majority (39%) felt that MOT volumes would remain the same as last year, however.

Garages and workshops were warned of a reduction in demand for MOT tests last month as all vehicles that were eligible for the Government’s six-month Covid extension had been tested.

Data released by the Driver and Vehicle Standards Agency (DVSA) forecast that 3.49 million MOTs are set to expire in March, equating to only 152,000 more than the same month in a ‘regular’ year. While this is an increase, and when spread across all MOT stations, it reflects the opinion stated by 39% of those polled that volumes will remain largely unchanged for the two typically busiest months for MOTs in 2021.

Bill Fennell, chief ombudsman and managing director of The Motor Ombudsman, said: “The research offers an interesting insight from those businesses that are ‘on the ground’ conducting the MOT tests.

“It is encouraging to see that the majority estimate that MOT volumes will hold up during the peak months, but there is equally an element of concern that demand may also be lower than March and September last year. There will also undoubtedly be more challenging periods for businesses in between, such as in April and May, due to the knock-on effect of motorists using the government’s six-month MOT extension introduced in response to the pandemic.”

A record number of vehicles failed their MOT test last year due to faults relating to exhaust emissions, it was recently revealed.

Diesel vehicles saw the greatest surge in failures due to emissions, with a rise of 240% compared to just 37% for petrol vehicles.