Infiniti cancels model as too expensive for predicted demand levels 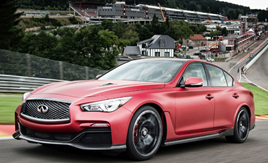 The Infiniti model set to compete against the BMW M3, Mercedes-Benz AMG C63 and Audi RS4 has been canned.

In an exclusive interview with Car at the Frankfurt Motor Show, Infiniti vice-president Francois Goupil de Bouille said the Q50 Eau Rouge (pictured) was too expensive to produce, given its modest sales forecasts.

“It was originally presented as a prototype but after we evaluated sales numbers, we realised it was not realistic to produce it,’ he said.

“It was just too costly. That was it. It is always a matter of balance of cost versus benefits and we decided to reign in our costs.”

De Bouille did not rule out the possibility of launching a number of key performance models under a branded performance arm to take on Mercedes-AMG, Quattro and Motorsport.

“Performance will always be a key attribute,’ he said, adding that the company was currently in the process of deciding both how and when it would deliver that performance across the Infiniti range.

‘We will always challenge the market and its conventions… all things are being considered,’ said de Bouille, before hinting that Infiniti would consider leftfield alternatives such as high-performance diesel or stripped-out low-weight models over the traditional high-power petrol route its rivals follow.”