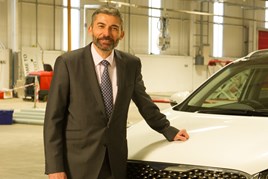 Kia Motors UK will not leave smaller dealerships behind as it prepares to take its ‘next big step in volume terms’, says outgoing commercial director Yaser Shabsogh.

Shabsogh, who has seen Kia’s UK sales rise from 29,372 when he joined the brand as sales director in 2007 to 78,536 today, is heading to the Middle East at the end of January to become managing director at Almajdouie Hyundai, the distributor in eastern Saudi Arabia based in Damamm.

But, speaking to AM this week, he spelled out a promising future for the Korean manufacturer in the comings years and promised that the brand would take its “loyal” network of smaller, family-run dealerships along for the ride as it aims to top 100,000 UK registrations per year by 2020.

While targeting sales success, Shabsogh said that aftersales was a key area in which dealerships could expect to benefit from Kia’s projected growth.

A seven year warranty and the growth of service plans popularity means that many of the brand’s products return to main dealers for regular servicing and Shabsogh said: “Our warranty car parc is now fourth in the UK, just behind Ford, Volkswagen and Vauxhall and that is only going to benefit our dealerships as our growth continues.

“The new CI which we started four years ago is complete in virtually all of our dealerships now, apart from a few tiles that need to be laid, and we’re really grateful that everyone has bought into that the way they have.

“The likes of Arnold Clark, Lookers and Pendragon are all looking to invest and grow with us as but many of our dealers are still smaller, family-run businesses that have been with the brand for many years and we’ll be taking them with us on the journey as we target 100,000 UK sales. We won’t be leaving anyone behind.”

This week’s opening of a new distribution centre at Stallingborough, near Grimsby, marks the start of a ten year relationship with logistics specialist Paragon and what Shabsogh described as the brand’s “next big step in volume terms”.

As well as carry out PDIs on cars newly imported from factories in Slovakia and Korea, the £20 million, 88 acre site will see the inspection of defleeted vehicles under 18 months old which will re-enter dealerships as Kia approved used cars.

All Kia approved cars come with the full seven year warranty having been re-applied, another move aiming to encourage owners to stick with dealerships for aftersales services.

The brand is also trying to streamline its sales processes and online presence.

Shabsogh said: “We’re working very hard to develop the way that the brand and the dealers communicate with customers online. One of the main things we have introduced is video technology that allows customers to see the areas of their car that require work.

“Giving customers an insight like that goes a long way to building trusts and means that they don’t always have to visit the dealership to learn about the work that needs to be done or accept a recommendation over the phone.

“Ultimately it’s important that we speak with one voice, though, and we need to ensure that our customers receive the best possible service.”

Shabsogh described 2016 as the start of Kia’s “next big step in volume terms”, with growth delivered by a raft of new product in key sectors.

And he revealed that the brand would look to increase its number of UK dealerships from its current 188 – the largest in its history – to around 200 as new Optima Wagon, Picanto, Rio and the development of its hybrid offering began to bear fruit.

He said: “These are areas where large sales gains can be made.