Renault appeals to dealer network for open and honest conversations 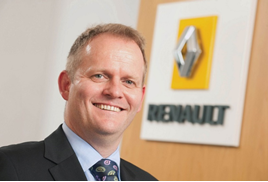 Renault dealers have been invited to share honest feedback directly with the brand’s directors following its bashing in the latest National Franchised Dealers Association survey.

Renault UK was the lowest scored franchise on dealers' overall likelihood to recommend, with a 4.2 out of 10 score.

“We’ve arranged to have some focus groups with our network and we’ve offered an open invitation for the network to meet with us in April to discuss any concerns,” Darren Payne, sales director, told AM.

The negative results of the NFDA survey came in contrast to Renault’s win of the AM Award for Franchise of the Year, voted for by AM readers. In 2015 the franchise achieved a 4.2% market share across Renault cars, vans and Dacia cars and is confident of achieving its five-year plan's target of 5% in 2017.

It also expanded by 19 new outlets – including recruiting 13 new partners -  and improved the an average network return on sales from 1.2% to 1.5%.

However the NFDA survey suggested franchisees were not happy with Renault’s new car targeting process and its volume aspirations.

“Obviously there are clearly different groups. We have a large proportion of the network who are delighted with performance, and from the survey I take it that there are some dealers who have some concerns.

“We’re not the type of franchise to bury our heads in the sand. We’re saying ‘okay, let’s continue to have conversations’,” Payne said.