Volkswagen’s market share fell and the Golf’s position as the highest selling new car in Europe is being increasingly threatened by the Ford Fiesta, according to JATO Dynamics.

For the year to date, registrations in the five markets of the UK, Germany, France, Spain and Italy totalled 8.51 million units, an increase of 7.4%.

Italy and Spain were the top performers, registering increases of 17.4% and 13.4%, respectively, when compared with the same period last year.

Italy’s increase was the country’s best performance since September 2010.

This can largely be attributed to tax incentives to encourage companies to increase investment in automotive fleets through the policy of super amortisation.

Similarly, it was the fleet and rental markets which boosted Spanish figures and enabled Spain to register more than 80,000 units for the first time since September 2007.

In contrast, France’s modest 2% increase on last year was due to increased sales of demo models which were up by a significant 20.5%, with private registrations falling by 4.6%.

The UK and Germany complete the top five, posting increases of 1.6% and 9.4%, respectively, on the same period last year.

Volkswagen Group led the market, maintaining its position as Europe’s largest car manufacturer by registering 256,000 units in September, a 3.3% increase on the same period last year.

The car maker’s volume was boosted by the performance of the Skoda and Audi brands which posted increases of 8.4% and 7.9% respectively when compared to the same period last year.

The Volkswagen brand’s performance stalled, registering 122,900 units which is a small 0.4% increase on the same month last year.

Compact (C-Segment) cars accounted for 29% of the group’s total registrations, but volume for this segment fell by 5.3%.

Their SUVs accounted for 17.5% of the group’s total, but its volume increased by a significant 20.9%.

Despite Volkswagen Group’s fall in market share, it was PSA that experienced the highest market share decline in September, falling from 10.1% to 9.0%.

This was driven by double digit declines in registrations in the city car and mid-size car segments and a modest 2.6% rise in the SUV segment.

This significant growth was largely due to the strong performance of its core segments – compact, midsize, and SUVs.

The manufacturer’s performance was also boosted by the strong results of Land Rover and Jaguar which posted increases of 52.4% and 39.3%, respectively.

FCA registered 80,100 new vehicles, which is a 14.8% increase in registrations, as a result of the double-digit growth of all of its brands.

Felipe Munoz, JATO’s global industry analyst, said: “The automotive industry is continuing to perform well despite the challenges in the UK market and the significant fall in private registrations in the French market.

“Even with these challenges, the European registrations are on course for growth as we head towards the end of 2016.” 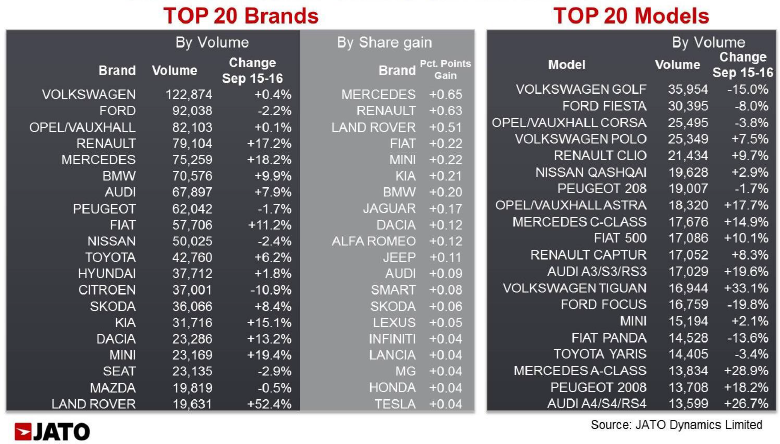 Although the Volkswagen Golf again topped the model table, it faced competition, with the Ford Fiesta, only 5,559 units behind.

The distance between the Golf and the rest of the model ranking has not been this close since March 2015.

Despite topping the ranking, the Golf posted a 15% decline on September 2015, whilst the Ford Fiesta recorded a less dramatic 8% decline which allowed it to close the gap.

The Nissan Qashqai recovered following a decline in August to become the best-selling SUV, outselling both the Renault Captur and the Volkswagen Tiguan in all of the five markets analysed.

The big winners of the month in terms of market share were the Hyundai Tucson, which was also the seventh best selling SUV, the BMW X1, the Fiat Tipo, the Renault Kadjar and the Volkswagen Touran.

Other notable changes in September include the Fiat 500 which entered the top 10 model ranking, and the Opel/Vauxhall Astra which posted the highest percentage increase of the top ten ranking.

Of the newest launches, the best performers were the Jaguar F-Pace, Mini Clubman and Seat Ateca.

“The close race at the top of the model ranking is hugely significant as it shows that the Volkswagen Golf is being challenged despite it hanging on to the top spot.

“Despite its historic dominance, the market leader will face significant challenges towards the end of the year as its rivals close in,” said Munoz.