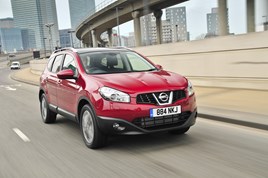 Nissan has been urged to carry out further safety checks to Qashqai SUVs after a pensioner was cleared of killing a pedestrian after lawyers alleged that a malfunction had caused her car to accelerate “uncontrollably”.

Great grandmother Ann Diggles was cleared of death by dangerous driving following a trial at Preston Crown Court, which concluded on Tuesday, after lawyers claimed a malfunction in her vehicle’s electronic throttle could have caused an ‘uncommanded acceleration’.

The 82-year-old’s 2007 Nissan Qashqai mounted a pavement and collided with 53-year-old Julie Dean, who was walking out of a charity shop in Leyland, Lancashire, causing fatal injuries, in July 2014.

Nissan insisted that the Qashqai is safe and denied that there was a fault with the vehicle involved in the collision, the Daily Mail reported.

Police vehicle examiners, working with experts from Nissan, also said that there was no evidence of any braking at the time of the tragedy and no faults with the accelerator on the vehicle, which had been bought new by Diggles in 2007.

Experts told the court that an undercharged battery could have prompted the acceleration and Diggles had been driving the car after a three-week holiday in Madiera, the court heard.

Two other Nissan owners came forward and gave evidence of similar occurrences in their own Nissan Qashqai’s after being alerted to the incident by reports in the press of the incident, however.

And in his closing speech to the jury, defence barrister Alistair MacDonald QC argued that their accounts ‘provided powerful support that these surges of acceleration do in fact happen’ and it was ‘not a theory’.

Beckenham added: “Nissan would do well then to ensure that they are carrying out further checks to assure itself that a necessary product recall is not the final outcome.”

A statement issed by Nissan said: “First and foremost our thoughts and condolences are with the family and friends of Julie Dean.

"The vehicle in this case was examined by Nissan and by the police. At no point was any fault found with the vehicle which could have caused this accident.

"This verdict does not reflect on the safety of the vehicle, the only issue to be decided in this case was whether the driving of the defendant was dangerous or careless and caused the death of the victim. The Prosecution was unable to prove this beyond reasonable doubt.

"The Qashqai has an exemplary safety record, and has been tested and complies with all safety regulations in all markets.

"Both Nissan and the Police have concluded that the vehicle was operating as expected and with no fault that could have contributed to this tragic set of circumstances.”