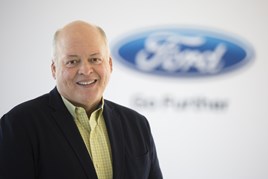 Ford Motor Company has announced the appointment of “true visionary” Jim Hackett as its new president and chief executive among a series of changes at the top of its senior leadership team.

In a statement issued by this afternoon, the US automotive giant said that the move, which sees Mark Fields retiring after 28 years with the blue oval, was “designed to further strengthen its core automotive business and accelerate a strategic shift to capitalize on emerging opportunities”.

Hackett was formerly chief executive of Steelcase, Interim Athletic Director at the University of Michigan and has been executive chairman of Ford Smart Mobility LLC since March 2016.

Commenting on Hackett’s appointment, Ford said: “We’re moving from a position of strength to transform Ford for the future.

“Jim Hackett is the right CEO to lead Ford during this transformative period for the auto industry and the broader mobility space.

“He’s a true visionary who brings a unique, human-centred leadership approach to our culture, products and services that will unlock the potential of our people and our business.”

Hackett said: “I am so excited to work with Bill Ford and the entire team to create an even more dynamic and vibrant Ford that improves people’s lives around the world, and creates value for all of our stakeholders.

“I have developed a deep appreciation for Ford’s people, values and heritage during the past four years as part of the company and look forward to working together with everyone tied to Ford during this transformative period.”

Ford said that Hackett will focus his attentions on three key areas: sharpening operational execution across the global business and addressing underperforming parts of the business; modernizing Ford’s business to speed-up decision making and improve efficiency; transforming the company to meet future challenges.

All three appointments are effective June 1.