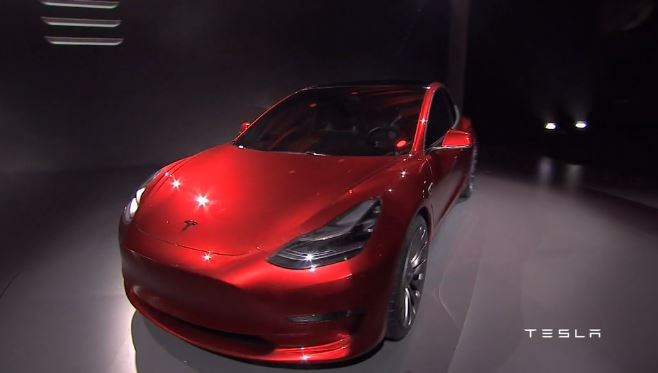 Tesla has delivered the first 30 of its Model 3, but the company's boss Elon Musk has said there will be "production hell" to ramp up from 5,000 cars a week this year to a total volume goal of 500,000.

The plan is to increase production to 10,000 cars a week by the end of this year. Tesla has said there have already been over half a million pre-orders.

At the launch of what is Tesla's first volume product, Musk said: "There are going to be major challenges over the next six to nine months over how we're going to build this huge number of cars. We're going to be in production hell.

"I get questions on Twitter quite a lot asking about when customers will get their Model 3 and sometimes it's not phrased as nicely as that. We are going to drive this production ramp as fast as we can."

Tesla does not reveal pre-order numbers, but estimates for the Model 3 expect there are over 11,500 pre-orders from the UK, with each customer putting down a £1,000 deposit.

The UK is second only to Germany at 20,000 units for the level of pre-orders in Europe. Model 3 deliveries will start in the US and there are 255,760 pre-orders to fulfil, followed by Canada at 36,764, Germany and then the UK. Norway's strong EV market has fewer pre-orders than the UK at 4,685. These figures were estimated in May 2016 so the figures are likely to be higher now.

The UK market size for plug-in vehicles last year was 22,400 vehicles, so Tesla's Model 3, if pre-order estimates are to believed, could potentially conquest a decent chunk of plug-in sales. The potential conquest figure could be higher if customers of conventionally powered cars decide to jump out of their Focus and try an EV for the first time with Tesla.

However, this is only a possibility if Tesla can match production with demand and Musk has confirmed capacity is already sold out for the first year. With UK customers not expected to recieve their Model 3 until the end of 2018 at the earliest, some may be asking for their deposits back due to the delay.

Musk said there are 10,000 unique parts in the Model 3, with two thirds sourced from North America and the rest globally. He said a slow down in any one part can delay production.

Musk said: "I want to say to those that have pre-ordered, it really does matter to us. We're going to do everything we possibly can, working day and night, to get these cars to you as soon as possible. We want to do right by you for the loyalty that you have shown us."

AM asked Nissan if the Model 3 posed a threat to its position as market leader for EV sales in the UK with its Leaf.

A spokesman for Nissan said: "While Nissan doesn’t comment on competitor news or product announcements, we welcome any advancements that enhance public awareness and adoption of electric vehicles, and investment in infrastructure.

"We are proud to be the pioneers of a zero emissions future and, with the Nissan LEAF – priced from £16,680 including plug in car grant – plus our support in developing a nationwide electric vehicle charging network, we are ensuring an electric reality is available to everyone, today.” The next-generation Leaf will be revealed on September 6.

The Model 3 interior is minimalist with the steering wheel and large touchscreen the dominating features in the cabin. All controls for the car can be operated from the touchscreen, eliminating the need for buttons and switchgear, other than the indicators, drive select lever and two scroll wheels on either side of the steering wheel. There is a single long slot air vent, rather than seperate vents on the dash and heat and direction can be controlled with the touchscreen.

Musk said all Teslas, including the Model 3, are built with the euqipment for fully autonomous driving and cars can be updated with this feature wirelessly.

Musk said passengers will be able to watch a movie, talk to friends or go to sleep with their Tesla taking full control of all driving in the future. The autopilot technology will be priced at an optional $5,000 (£3,813).

Tesla does not partner with franchised dealers for its sales in the UK, instead opting for owning and controlling its own retail group of 19 sites and stores. It currently has 10 service and repair centres and does not view aftersales as a profit centre.