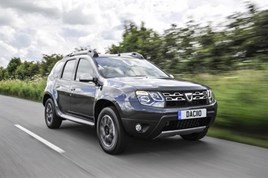 Space, reliability and price emerged as the key car buying considerations for parents when Dacia approached users of Mumsnet to gain insight into their motoring needs.

Value for money came out as a key driver for family car buyers, with 72% of the 2,000 respondents to Dacia’s survey stating that price was the most important consideration when purchasing a new car.

Louise O’Sullivan, head of Dacia, UK, said: “Our survey with Mumsnet has shown that since becoming parents, those asked have re-evaluated what the most important elements of a car are to them and their family.

Two-thirds of UK parents who responded to the Mumsnet survey said that they would buy a brand new car if they had the means but over 70% of respondents claimed that fancy extras weren’t important.

Dacia revealed that, when asked “How much would you ideally spend to have a new car?” the average response was £16,320.50.

While 60% of survey respondents thought that the brand of their car is not important, a huge 99% still value reliability, with 90% saying they have become more aware of reliability as an importance since becoming a parent.

A total of 93% say space is sought after.