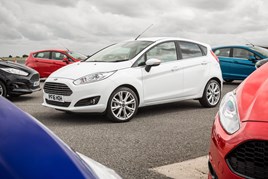 Ford is the most favoured manufacturer among second-hand car buyers, according to research into used buying trends by AA Cars.

Sales of used Ford Focus and Fiesta models have topped all other models in the last three years, the Ford Fiesta having outsold every other car in the used car portal.

Used Focus sales follow closely behind, accounting for nearly 4% of all cars sold over the same period.

Since 2015, the Honda HR-V has seen a 748% increase in sales - the crossover SUV has seen the biggest surge in popularity over that time period since a second generation of the vehicle was reintroduced to the market in 2015.

Holding their value both in terms of price and taste level, black cars have overturned the status quo held by white cars over the last few years. Black is back in vogue as black cars now make up more than a fifth (21.5%) of used car transactions, with white and silver cars in second and third place.

The data also shows an increased appetite for less conventional car colours with the sale of used brown cars showing an upward trend of 5.3%.

Over the last three years, brown cars have proven to be more popular than other left field colours such as purple (3.5%) and orange (3.3%).

The sale of used brown cars is trending more than twice that of the colour grey, coming in at just 2.6%.

James Fairclough, CEO of AA Cars, said: “The rise of car finance products ensures that customers are more regularly upgrading to new cars, meaning the flow of nearly new vehicles into second-hand dealerships has boosted the value and quality of stock on sale.

“This comprehensive temperature test of the second-hand car market shows that old favourites from Ford, Vauxhall and Nissan continue to dominate market share.