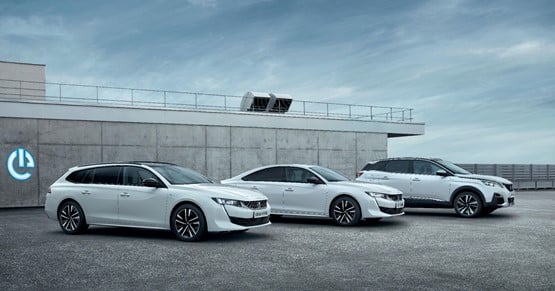 Peugeot is now accepting reservations for four new plug-in hybrid versions of its 3008 SUV and 508 models.

The 3008 SUV Hybrid, 3008 SUV GT Hybrid4, all-new 508 Hybrid and 508 SW Hybrid are all set to join Peugeot’s growing range of electric and plug-in hybrid vehicles and customers can place their reservations online with a £500 deposit.

Deliveries of the new cars will commence in January 2020.

Peugeot began taking online reservations for its first electric vehicle (EV), the e208, in May, well ahead of its arrival in UK dealerships early next year.

The 508 and 508 SW Hybrid will offer drivers combined fuel efficiency of up to 235mpg and CO2 emissions as low as 31g/km, with both the saloon and SW capable of up to 39 miles of fully-electric driving.

The new four-wheel drive 3008 SUV GT Hybrid4 comes with a 300PS plug-in drivetrain that’s capable of 0-62mph in just 5.9 seconds, and will provide ultra-low emissions of 28g/km and up to 40 miles of fully-electric range.

All of the models can be fully charged in less than two hours using a standard 7kW Wallbox. The 3008 features a 13.2kWh traction battery, while the 508 uses an 11.8kWh battery.

Peugeot says plug-in hybrids carry a whole host of benefits, including various localised incentives such as free charging and free parking, as well as exemption from the London Congestion Charge.

Customers can also benefit from reduced chargepoint purchase and installation costs thanks to a Government grant that offers a 75% contribution (up to £500) towards home chargepoints.

The French manufacturer will be launching a full suite of services to assist customers in the transition to electrified motoring, including e-Remote Control – a feature within the MyPeugeot app that enables users to remotely control functions such as programming a charging session.

David Peel, managing director of Peugeot UK, said: “2020 will be a significant year for Peugeot, as we officially start our UK deliveries of our new generation of fully electric vehicles, alongside all-new plug-in hybrid variants.”