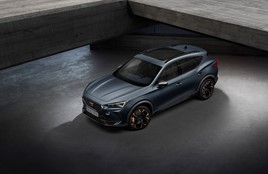 Cupra has starting production of its new Formentor performance SUV ahead of the car's official on-sale date in October.

The new model, which is the first stand-alone Cupra, will be available to order in the UK on October 20.

Pre-orders have been open since March.

Initially, a 2.0-litre 310PS petrol engine will be offered, followed by other petrol versions and a plug-in hybrid.

Wayne Griffiths, Seat and Cupra President, said: “The new Formentor is a big step for Cupra. As its first uniquely developed car, it will make the brand grow, be more visible and more desirable. We aim to exceed our initial goal of doubling Cupra’s sales volume with the launch of this car and break into new markets thanks to its wide range of engines. I am convinced that this model will change the future of the Cupra brand.”

The Cupra Formentor marks the brand’s entry into the CUV segment, which is expected to double its market share in Europe over the next five years.

Initial production of the Formentor will begin with 160 units per day, however it will eventually represent more than 10% of manufacturing volume at the plant once it is at full production rate.

In total, manufacturing the Formentor includes 3,000 workers on Line Two of the plant, across three shifts.

Since 2018, Cupra has sold more than 55,000 units globally. Both Cupra Formentor and Cupra Leon will be available in the UK with plug-in hybrid powertrains and will be joined in 2021 by the all-electric Cupra el-Born.

Pricing and specification for the new Formentor will be released on October 20.