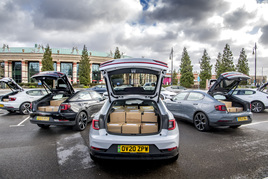 Polestar has donated 4.4 tonnes of food to charity Fareshare UK, which will be distributed in the Manchester area following the opening of its second Space in the city.

Empty Polestar #NoWasteofSpace boxes were sent to unsuspecting recipients in January, to fill with non-perishable food and personal care items.

The hashtag quickly went viral on social media and the car brand was inundated with requests for empty boxes from celebrities, members of the public, automotive industry professionals and media. Polestar UK had to commission a further run of 100 boxes.

Fareshare UK says this is enough to provide more than 10,000 meals for vulnerable people in the Greater Manchester area.

Jonathan Goodman, head of Polestar UK, said: “We could never have envisaged the incredible response this campaign received, and the generosity of all who took part is truly heart-warming.

“In 2021 it’s awful to think that some of the nation’s most vulnerable are having to go without basic items, so I’m glad the Manchester team were able to use our resources to help such a worthy cause.

“We’re looking forward to continuing this effort once the Trafford Centre has re-opened, working with the other retailers and centre management to support the community around our latest Space.”

Striking upon the idea to use their test drive cars – which have been sitting idle due to COVID-19 restrictions – the Manchester Space team will use the all-electric fleet to deliver the boxes in a sustainable and environmentally-friendly way.

Because of the quantities involved, 10 Polestar 2 models will be used to ferry the tower of boxes to Fareshare’s hubs, along with support from Geely group company LEVC, which supplied a VN5 electric van to assist with the deliveries.

Polestar’s Manchester Space is located at the Trafford Centre shopping mall. Operated by Lookers, the site is the brand’s second location in the UK following the opening of its London Space last year.