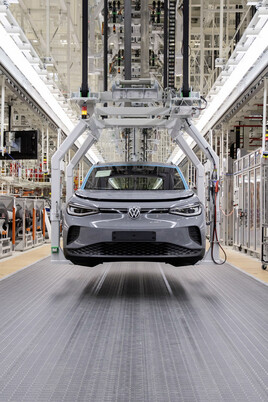 Volkswagen is increasing its production capacity for electric vehicles (EVs), in order to reduce lead times for new models.

From today, the VW ID4 is now produced at four plants, with a fifth expected to join before the end of the year.

Emden is now the second site for EVs in Germany, following Zwickau, and also joins the Chinese plants in Anting and Foshan. Chattanooga (US) and Hanover will also commence production this year.

“Rapid expansion of production capacities for our successful ID4 model is a key component of our Accelerate strategy. It helps us accelerate the transformation to zero-carbon mobility and create further capacities to meet the high demand for electric vehicles,” said Volkswagen CEO Ralf Brandstätter. “With our clear commitment to the site, we aim to show that cost-effectiveness and competitiveness are not only possible in the region, but that we can even enhance them lastingly.”

Volkswagen was forced to remove all but one version of its ID3 electric car, in February, in order to shorten lead times.

Volkswagen Group chief executive Herbert Deiss also warned that a shortage of components sourced from Ukraine could prove its biggest supply issue in 2022.

VW expects to build 1.2 million EVs per year as a result of its reconfigured production capability.

Alongside the ID4, Emden will make another model – the AERO B – next year. In addition, production of the ID Buzz will commence this year at Volkswagen Commercial Vehicles in Hanover. It will be joined from 2023 on by the ID3, made in Wolfsburg, while a further electric vehicle – the Trinity – will then roll off the assembly line at the location starting in 2026.

Following its market launch in early 2021, the ID4 has quickly become VW’s best-selling EV. In the first quarter of 2022 alone, Volkswagen delivered more than 30,000 units – meaning every one-in-two all-electric vehicles from Volkswagen is an ID4. Some 163,000 units have been delivered since its launch. There are currently around 73,000 orders on hand worldwide for the model.