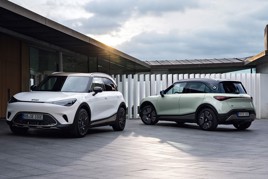 Electric car brand Smart yesterday revealed aims to ramp up car sales once deliveries begin of the first of its new generation of cars, the Smart #1.

The electric-powered five-door crossover, whose #1 name is pronounced "Hashtag One", will reach the UK in 2023 and is hoped to put the Smart brand on the consideration lists of far more car buyers than its iconic, yet niche, two-seater Smart ForTwo has ever been able to.

The first new model since Mercedes sold a 50% stake in Smart to Chinese automaker Geely in 2019, the Smart #1 is built using Geely's SEA architecture and has a range of up to 270 miles on a full charge.

Alone, Mercedes had struggled to make Smart a financial success since its launch.

Omnichannel retailing is Smart's focus now; it has a direct retail strategy designed to facilitate online new car purchase, and its dealers have agency agreements for new car sales fulfillment.

The retail network, which comprises of at least one Smart sales point in each of Mercedes-Benz UK's market areas, will begin taking pre-orders this December and in early 2023 they'll get left-hand-drive models at their showrooms to allow customers to look and feel before the UK's deliveries start.

Browne said: "Customers will clearly see a new era of smart, in terms of the product and the go-to-market strategy, but where they will see that consistency is in the retail presence.

"We're starting out from a really strong position, with a retail network including some of the best partners in the country, really professional with great retail environment.

"But now we're bringing new product into that space, and bringing different customers in there as well. But it's still fundamentally part of that retail network."