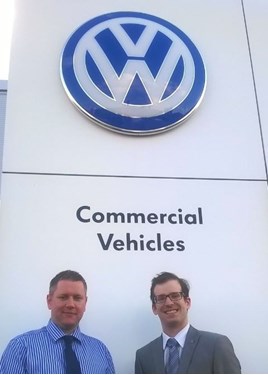 Brown joined the St Stephens Street business as its aftersales manager last September, and following his new appointment has launched a major push to become a flagship site.

Brown says he has great plans for the centre, which specialises in new and used Volkswagen commercial vehicles, aftersales as well as providing a dedicated service for fleet operators.

“I want Volkswagen Van Centre Birmingham be the country’s flagship site, and I believe our van centre is big enough and in the perfect location to achieve that. We have a great team here and everything we need for a very successful future,” Brown said.

Brown started working for commercial vehicle brand in 2006 in Newark as a service manager. A year later, he was promoted to aftersales manager and worked in that role until 2011 when he moved to Volkswagen Van Centre Hull where he stayed until joining the Birmingham business.

“I do live and breathe Volkswagen. It’s the brand and everything it represents – reliability, history, and great standards. I would not want to be anywhere else,” Brown added.

Brown has appointed Will Jephson (pictured, right) to replace him as the business’s aftersales manager.