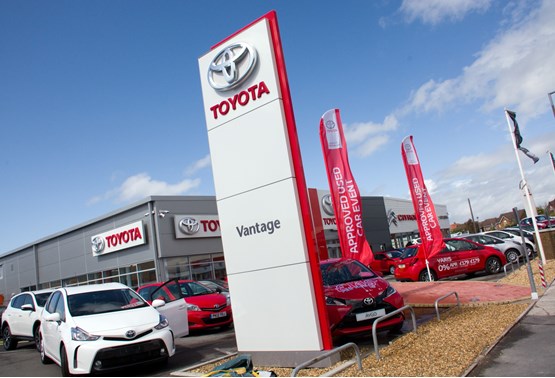 North West car dealer Vantage Motor Group is increasing its investment in the North West, including the relocation of its Toyota dealership in Grange-over-Sands to a brand new facility in Morecambe.

Since Vantage acquired Batemans Toyota at Grange-over-Sands in 2013 it has been looking for a new site to relocate to, in turn allowing supermarket group EH Booth & Co Ltd to purchase the Station Square site and begin construction of a new supermarket.

To cater for existing Grange-over-Sands Toyota customers, Vantage has also opened a dedicated Toyota service centre alongside its Citroen (John Wilding) site in Kendal, which is also being refurbished as part of the motor group’s investment in the region.

Most staff from Grange-over-Sands are remaining with the business.

Vantage has 10 dealerships across the North West spanning from Stockport in Greater Manchester up to Kendal in the Lakes, representing Hyundai, Toyota, Skoda and Citroen.

Vantage Motor Group managing director Mark Robinson (pictured) said: “We are pleased to have found a suitable site in Morecambe to relocate our Grange-over-Sands dealership to and by opening a dedicated Toyota service centre in Kendal our customers can be assured that the high levels of service they have experienced in the past will be maintained.

“With 10 Toyota dealerships across the North West, Yorkshire and the West Midlands we are extremely proud to be one of the largest Toyota partnerships in the UK.”

Vantage Motor Group was founded in Harrogate, North Yorkshire in 2003. The group has 21 dealerships across Northern England and the West Midlands representing Toyota, Kia, Citroen, Honda, Hyundai, Skoda, and Lexus. Turnover to the end of 2014 was £174 million.