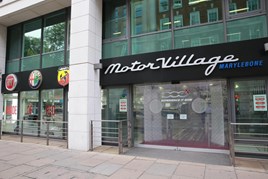 Motor Village UK has renewed its contract with Fulham FC of the Sky Bet Championship to become the club’s official car partner for the 2015-2016 season.

The one-year extension means that Fiat Chrysler Automobiles’ flagship London dealer will continue to supply Fulham FC with a fleet of vehicles for use as match day corporate shuttles and, on non-match days, for the club’s player care and academy departments.

Showcasing their latest models, the Fiat 500X and the Jeep Renegade, these cars will be Fulham FC branded alongside the sporty Alfa Giulietta as part of the arrangement with the club.

As well as supplying vehicles, the deal brings Wigmore Street-based Motor Village UK a set of marketing rights including in-stadium advertising, LED pitch perimeter branding and the opportunity to showcase vehicles to both Fulham FC players and fans at Craven Cottage.

“We are pleased to be involved with Fulham FC again for this season,” said Fabio Di Prima, managing director, Motor Village UK.

"Fulham have another tough season ahead of them, but it will be an exciting one too, and we want to be there with them on the journey. This sponsorship deal will once again allow us to showcase Fiat Chrysler Automobiles’ cars to players, staff and fans.”

“I’m delighted that our partnership with Motor Village UK as our official car partner has been extended for a second consecutive season,” adds Alistair Mackintosh, Fulham FC chief executive. “We have developed a fantastic working relationship with them and have been impressed by the quality of their service in assisting with the club’s daily logistics and transportation requirement.”