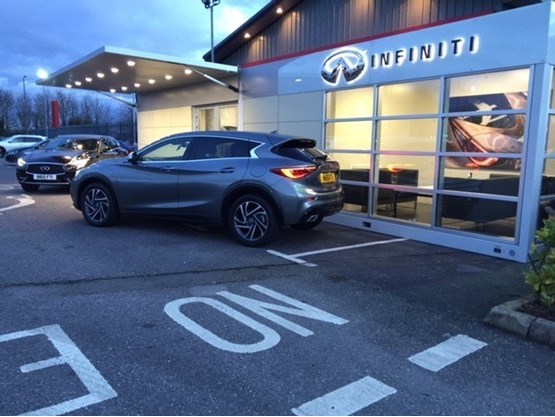 Infiniti has adopted an innovative pop-up showroom concept in Bristol as it accelerates its network expansion plans to benefit from interest in the new Q30 hatchback.

Motorline’s new Infiniti Bristol franchise is the first UK retailer to benefit from the scheme which sees a fully-functional dealership delivered to by lorry as a stop-gap for locations with new showrooms which are under construction.

It means that new franchises can start selling cars within days of a contract being signed with the Japanese premium brand.

The process is designed to help accelerate the growth of the Infiniti network from 10 to 25 outlets in the next 18 months as the brand aims to double year-on-year sales.

François Goupil de Bouillé, Infiniti Vice President, Europe, Middle East and Africa, said: “We have been overwhelmed with interest in the Infiniti Q30.

“The temporary showrooms are an ideal way of sharing the Infiniti Q30 and the rest of the range with as many people as possible in locations where a permanent Infiniti Centre is yet to open. It is a typically innovative Infiniti initiative.

“I am confident that with so many daring and exciting new models and initiatives like our new showrooms, Infiniti in Europe will continue to set further new sales records in the months to come.”

Twelve bespoke 28m2 centres have been constructed by Infiniti, with the first being deployed in Bristol, UK.

More Infiniti pop-up showrooms will appear across Europe in the coming weeks, in collaboration with Infiniti’s dealer partners.

Visitors to the pop-up showrooms will be able to see and experience the new Q30 hatchback and its many features, arrange a test drive and use iPads to configure their ideal specification in a unique augmented reality display.

They will also be able to explore the premium brand and the rest of the model range on a big screen while enjoying traditional Infiniti hospitality in the climate-controlled environment.

Infiniti's new Q30 hatchback went on sale last month, opening up the brand to a new customer base with a £20,550 starting price.

Later this year the QX30 crossover and Q60 sports coupe will also be introduced to the range, along with an upgraded Q50 saloon.