Pentagon on the move and expanding in Lincoln 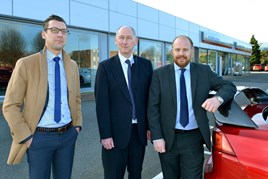 Pentagon is set to expand its presence in Lincoln, just six months after establishing its name in the city.

It has added the Mitsubishi franchise at its centre in Outer Circle Road from today.

Derby-headquartered Pentagon Group, which is leasing around half of the three-acre site from local motor dealer Charles Warner, will be employing 20 people at the site (including some team members who will be relocating from the current site on Tritton Road).

Pentagon also plans to move its Renault and Dacia business (currently based at Tritton Road) to Outer Circle Road in late April. This will follow a complete refurbishment of a separate showroom.

The site will also stock Renault commercial vehicles, plus they have also been appointed an official Renault Sport dealership.

There will be space for about 80 approved used cars and commercial vehicles across the new site.

Pentagon established itself in Lincoln in June when it took the Vauxhall franchise in Tritton Road, when it was lost by Charles Warner.

“We have been listening to our customers ever since we first arrived in Lincoln six months ago and it’s quickly become clear that we’ve outgrown the Tritton Road site.

“The imminent move of Renault and Dacia to this new location, together with the new showroom for the new Mitsubishi range is great news for everyone.”

Charles Warner previously represented the Mitsubishi franchise in the city but it has been transferred to Pentagon as part of the deal.

The new dealerships will expand Pentagon Group's current portfolio of sites to 34, which are spread across Yorkshire, Greater Manchester, Derbyshire, Staffordshire, Nottinghamshire, Lancashire and Lincolnshire.