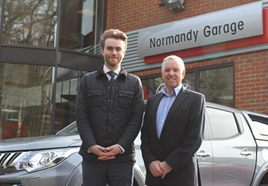 A family-run dealership in Surrey that is marking its 50th year in the business this year has taken on the Mitsubishi franchise.

Normandy Garage, in Guildford Road, Normandy, was established in 1966 by John Richards.

His sons Ian and Johnny are, respectively, the dealer principal/sales manager and financial controller.

John said: ‘Family values are what the garage trades on – treating people how you want to be treated.

“We’ve got lots of loyal customers, and what we excel in is customer service.

“They come back. It’s not rocket science.’

The showroom has space for five vehicles and there’s a three-ramp workshop as well as a customer waiting area with free Wi-Fi, plasma LCD TV, fresh-bean coffee machine and daily newspapers.

In addition, a free pick-up and drop-off service is offered, as are loan vehicles.

An official launch weekend was held on March 19 and 20, but such is Normandy’s successful approach that it managed to sell four Mitsubishi vehicles soon after adopting the franchise.

Future plans also include having a presence at the Surrey County Show on May 30.