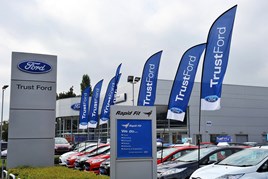 TrustFord, the Blue Oval’s manufacturer-owned retail group, has been been recognised by the Green Organisation for its environmental best practice.

TrustFord installed energy efficient lighting, on-site burners to cut resource usage and solar panels across a number of its 65 dealerships and has won the annual Green Apple Award for Environmental Best Practice for three consecutive years.

As a result, the business has been granted Green Apple World Ambassador 2016 status. The award was set up by the Green Organisation as part of its international campaign to identify, reward and promote environmental best practice.

Steve Hood, TrustFord chairman and chief executive, said: “The award reflects our dedication to environmental best practice within TrustFord, and it’s an honour to be recognised this way by The Green Organisation.

“Being a good corporate citizen is one of our strategic goals and we are committed to creating an environmentally conscious culture throughout our organisation.”

The Green Organisation was set up in 1994 as an international, independent, non-profit, non-political, non-activist environment group, dedicated to recognising environmental best practice around the world.

AM Poll
Which aspect of your business will require most focus in 2021?
Vote
View all
1179