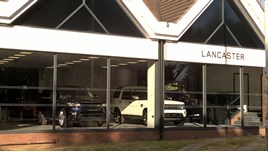 Jardine Motors has opened an interim Land Rover dealership in Wolverhampton as it prepares to build a dual-brand JLR showroom in the city over the next 18 months.

The refurbished site will grow Jardine’s Land Rover business to six dealerships. It already has a Jaguar dealership in Wolverhampton.

Niall Hooper, Jardine divisional director for Jaguar Land Rover, said: “We are in the process of finalising plans for a new Jaguar Land Rover site in Wolverhampton which will support the company’s retail ambitions, this however is not due for approximately 18 months.

“But we wanted to be able to offer customers access to the latest Land Rover range now, which is why we have invested in this temporary site.”

Hooper said the group has started a recruitment drive across the Midlands to support its new JLR businesses. It is looking to take on 48 new starters for the new Wolverhampton Land Rover site alone in addition to the 10% increase in new employees who have joined the existing Jaguar Wolverhampton dealership.

Neil Williamson, Jardine chief executive, said: “We’ve seen really solid performance in the first half of 2016 and we hope to maintain this momentum with the opening of new sites like Wolverhampton as well as our Milton Keynes dual-brand Jaguar Land Rover showroom which is due to open later this year.

"We believe our partnership with Jaguar Land Rover is key to our overall business success.”

JLR worked with Jardine to acquire dual-site in Wolverhampton from JRB Automotive after legal proceedings by Pendragon blocked the company's original plans for the project.

His new business JRB Automotive had partnered with JLR on the new build centre in Penn Road. Pendragon closed its Land Rover business in Wolverhampton in 2012.