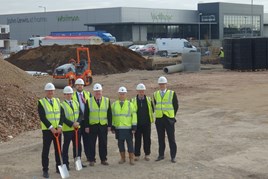 Marriott Motor Group has blamed pressure in margins and the effects of the Volkswagen emissions scandal for a slump in profits.

Despite turnover rising by 3.3% (to £160.5) in the year to December 31 the family-run group, which operates a network comprised of three Audi dealerships and five Volkswagen dealerships in East Anglia, reported a profit before tax of £208,300 for the year ended 31 December 2015 – down £2.1m on a year earlier.

In a statement issued in its annual accounts, filed with Companies House, the group said that "continued pressure" on new car margins and the impact of the Volkswagen emissions scandal were to blame.

A statement said: “Group profitability has reduced significantly against 2014 due to continued pressure on new car margins and the impact of the Volkswagen emissions scandal.”

Marriott Motor Group had also invested in its Audi and Volkswagen facilities in Kings Lynn during 2015 and was preparing for the development of a new Audi facility in Ipswich, however, which had resulted in some “short-term operational challenges”, it said.

Marriott Motor Group's new £8 million Audi facility on the Futura Business Park in Ipswich is expected to be completed by the end of 2016.