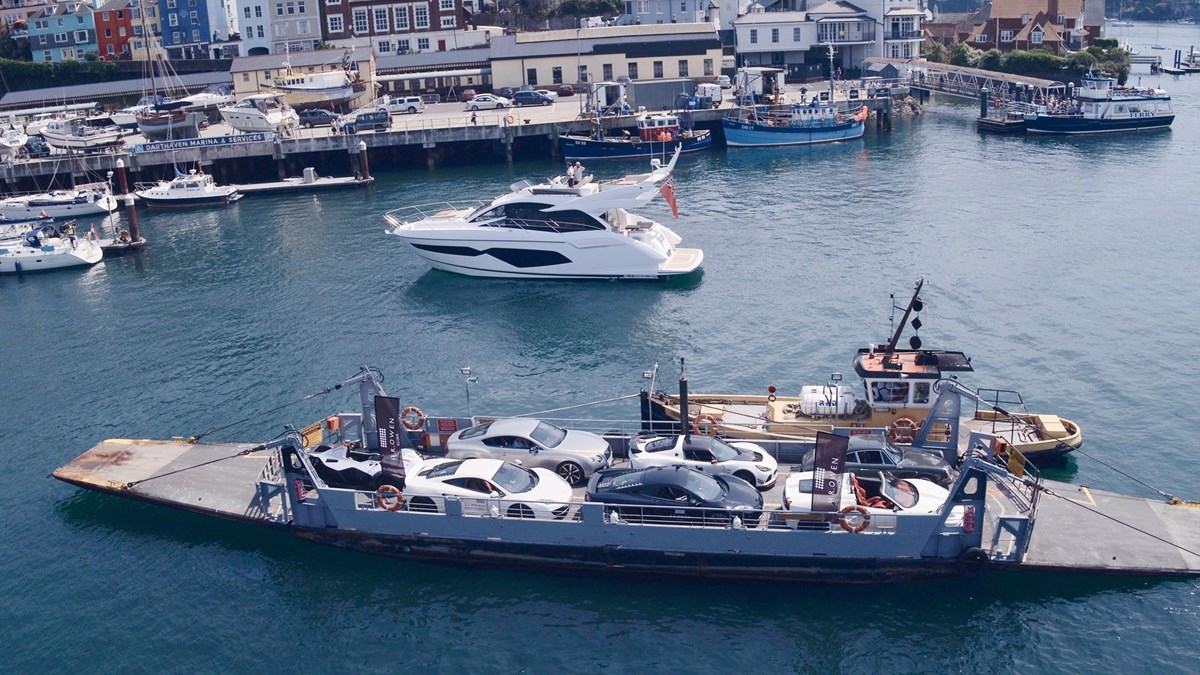 HR Owen Ecurie lined up supercars alongside super yachts as it launched a glamourous pop-up showroom at Darthaven Marina.

Organised in conjunction with Sunseeker Torquay the project will see the Cheltenham-based luxury car retailer aim to offer supercars to yacht owners throughout the summer season.

HR Owen Ecurie, the first specialist pre-owned multi-franchised dealership in the company’s history, offers its customers vehicles from the likes of McLaren, Porsche, Koenigsegg and Pagani, as well as the franchised brands within the HR Owen portfolio, such as Aston Martin, Bentley, Ferrari, Lamborghini, Rolls-Royce and BAC.

Many of the brand’s products took to the water as the retailer launched its innovative pop-up operation this week.

To celebrate the opening, seven cars were taken across Darthaven Marina using the Dartmouth Lower Ferry.

The ferry was accompanied across the marina by a newly launched Sunseeker Manhattan 52. In total the display was worth in excess of £2million.

“Darthaven Marina will play host to a number of yacht owners this summer, many of whom will also own a selection of luxury cars, or will have a strong interest in purchasing one.

“By positioning ourselves at the very heart of the marina we are ideally located to offer HR Owen service with the convenience of not having to travel to a dealership.

“We look forward to meeting customers old and new, and fully expect the partnership to be a great success for both partners.”

Tom Wills, director at Sunseeker Torquay, said: “To see the cars on the water alongside one of our newest yachts was a sight to behold and a great way to announce our opening.

“The synergy between superyachts and supercars is well-known and we are proud to open our doors to customers of both brands for the summer season.”

The newest HR Owen location is based at Royal Dart, Kingswear, Dartmouth and will be open seven days a week until the end of September.

The pop up will allow buyers access to a wide selection of the most desirable cars and boats in the UK from across the HR Owen and Sunseeker groups.