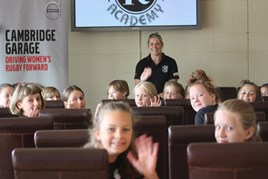 Havant-based Volvo dealership Cambridge Garage will support the development of women's rugby with sponsorship of the Burford Academy for a second year.

The women's rugby academy is run by England and Harlequins rugby player Rachael Burford and Cambridge Garage will provide Rachael with a V60 estate so that she can travel between Burford Academy camps across the south of England, as well as while on UK and international duties.

Cambridge Garage’s managing director, Victoria Stringer, said: “It’s been amazing to work with Rachael and her team to help provide a platform to develop and nurture the talents of future female rugby players. Rachael puts so much time and dedication into each camp, as we would do with our customers, to truly help the players grow in confidence by supporting the girls both on and off the pitch.”

Burford said: “The continued sponsorship from Cambridge Garage Volvo has been fantastic news for the academy and will again provide invaluable support as we host more camps throughout the year.”

“Sponsorship is hugely important to me as it provides an opportunity for the Academy to become feasible for the long term as well as being able to offer scholarship funds for players who may not have had access to our camps without it.

“It’s a great feeling knowing that local businesses want to support me so I’m able to give back to the game that has given me so much during my professional rugby career.”