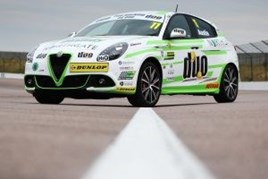 Alfa Romeo dealers are backing the brand’s return to the British Touring Car Championship (BTCC) after an 11 year absence.

An Alfa last appeared on the BTCC grid in 2007, but the Italian brand will return to the popular championship in 2018, with a Giulietta raced by Handy Motorsport driver Rob Austin.

Austin and the team’s commercial manager met with the UK’s Alfa dealer council to discuss plans to return to BTCC, he told Autosport, and found “it was obvious that there was a passion from the dealer network to make this happen”.

Dealer council representative Peter James, who is dealer principal at TH White in Wiltshire, said: “It’s fantastic to see Alfa Romeo return to the BTCC especially at such an exciting time for the brand.”

The brand has won a lot of positive press in recent months after the launch of its Alfa Giulia Quadrifoglio performance car, and it is about to enter the growing SUV market for the first time with its Stelvio.