NFDA diesel leaflet to dispel myths and ‘educate the public’ 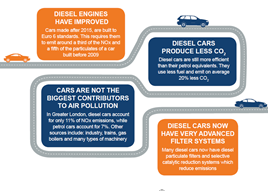 The NFDA has produced a leaflet to assist its car dealer members in their efforts to 'educate the public' on emissions.

The leaftlet analyses the different types of pollutants including NOx, CO2 and particulates and aims to clarify how consumers should approach their car buying choices with their vehicles' economy and emissions in mind.

NFDA director Sue Robinson said: “With the confusion and media speculation surrounding diesel and emissions, the NFDA and its members are striving to help consumers understand the issue.

“It is in the interest of the automotive industry that consumers have accurate and honest information to select the car that best suits their needs."

The role of diesel is examined by the leaflet, highlighting the differentiation between old diesel and modern Euro 6 engines and the different impact they have on air pollution.

Then, it looks at the Government’s plans to cut emissions and how these could affect drivers of diesel cars.

Finally, it lists the elements that drivers should consider when choosing which car to buy, these include: length of commute, high or low mileage driver and type of journey (motorways or short routes).

Robinson said: “Modern Euro 6 diesel cars must not be compared to older diesel.

"Euro 6 diesel cars emit around half of the NOx and a fifth of the particulates of diesel cars built before 2009.

“It is also important to highlight that cars are not the biggest contributors to air pollution, others include: industry, trains, gas boilers and many types of machinery.

“However, there are currently no government plans to change diesel taxation in a way that would punish retrospectively motorists who own a diesel car.

“NFDA members will use the leaflet to clarify the whole diesel debate and help consumers find the car that most suits their driving habits.

“Depending on the driver’s behaviour, modern diesel vehicles can be the most efficient option.”