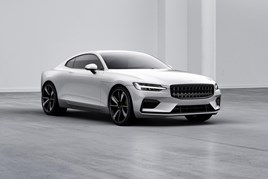 Geely Holdings will once again bypass “traditional” car dealerships as a sales platform when the Polestar brand enters the UK in 2019.

Following a model already voiced ahead of the introduction of the Chinese car manufacturer’s forthcoming Lynk & Co brand, Polestar models will be offered online on a subscription basis.

The news came as Volvo Cars and its Chinese owner Geely Holdings announced a £571 million investment in the Polestar performance brand following the official unveiling of its first standalone model.

A statement issued by Polestar following the unveiling of the 600PS Polestar 1 2+2 coupe yesterday  revealed that the investment will be used to establish a state-of-the-art Polestar manufacturing facility in Chengdu, China.

“Volvo Cars and Polestar will also benefit from synergies in the development of next-generation technologies such as shared procurement costs, joint development and economies of scale”, a statement added.

The brand will seek other efficiencies by bypassing both the established Volvo Cars UK dealer network and the possibility of creating a new standalone network to sell Polestar vehicles.

Volvo's dealer network will be called upon to meet Polestar customers' aftersales needs, however, potentially generating new revenues for the businesses which are currently at the heart of a bid by Volvo to attract 300 new technicians to their UK workshops.

Polestar models will be ordered 100% online and offered on a two or three year subscription basis.

The zero-deposit, all-inclusive subscription will also add features such as pick-up and delivery servicing and the ability to rent alternative vehicles within the Volvo and Polestar range, all incorporated into one monthly payment.

A statement issued by Polestar said: “The flat rate subscription means that having a Polestar car becomes a hassle free experience for the customer.

“This is facilitated by Phone-As-Key technology. It allows the owner to share a virtual key with a third party, and also enables access to a host of other on-demand features.

“This concierge service ensures that the customer only needs to focus on the enjoyment of driving.”

The Polestar brand is following the route to market already announced for Geely’s Lynk & Co SUV brand, which will also expected enter the UK market in 2019 offering a range of vehicles build on a Volvo chassis platform.