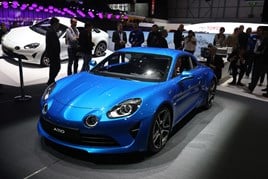 Four UK car retail groups will introduce the Alpine A110 coupe to a seven-strong network of showrooms in 2018 after Renault announced its list of dealer partners for the re-launched premium sports car brand.

Arnold Clark, Glyn Hopkin and Martins Group will be the only retail group’s outside the manufacturer-owned Renault Retail Group to sell the incoming Alpine A110 model when the franchised network becomes fully operational in Q2.

Renault UK said that the Alpine Centres had been chosen for their locality to prime regions for sports car enthusiasts.

Each will have bespoke Alpine Advisors in order to ensure levels of knowledge, expertise and passion that match the brand and, most importantly, customer expectations.

Régis Fricotté, international sales director, Alpine Cars, said: “We know that the new A110 is much-anticipated – particularly for the many sports car fans in the UK.

“In fact, when reservations opened in Europe, all 1,955 Première Edition cars were taken in just a few days. We believe the A110 offers a unique proposition for the UK and we have high expectations for the car here, with the UK being a true sports car market.”

Earlier this year Vincent Tourette, managing director, Groupe Renault UK, told AM that the specialist tooling and training required to work on the Alpine A110, and the relatively small volumes, meant that the Alpine brand was “not something that is viable for the entire network”, adding: “It is good to have a flagship vehicle like that.”

The mid-engined Alpine A110 was first shown at the 2017 Geneva Motor Show and will take on the likes of Porsche’s Cayman and the Alfa Romeo 4C when it arrives in UK showrooms next year.

Speaking after the announcement of the official Alpine network today, Tourette said: “Customers who reserved the Première Edition versions of the new model will be the first to collect their cars from the Alpine Centres.

“The interest we’ve received since the A110 was first unveiled is extremely inspiring for the future of the brand and we look forward to welcoming visitors to the Alpine Centres in 2018.”

Renault UK said that Alpine showrooms feature a unique corporate identity which “mirrors the brand” with an interior design that makes use of simple, authentic materials incorporating touches of Alpine blue.

Individual visitors will be welcomed by an Alpine Advisor whose role will be to guide customers along their buying journey and share their passion for Alpine by introducing, or reintroducing, them to the brand as well as explaining the new car’s use of lightweight materials and construction methods.

A statement issued by the manufacturer said that central London’s flagship Studio Alpine would be a “true showcase for the historic brand” with Alpines new and old on display.

Due to open in Q2 of 2018, further details of the facility will be revealed at a later date and will be operated and managed by Renault Retail Group London West. 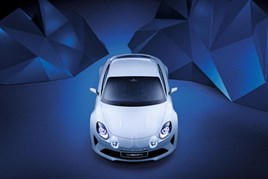 Renault’s special edition A110 Première Edition designed to introduce the French sports car brand to a new generation of customers.

True to Alpine’s DNA, the A110 Première Edition claims to be a lightweight sports coupé which places absolute agility and driving pleasure front and centre.

Designed and manufactured in France, the mid-engined rival to the likes of the Porsche Cayman and Alfa Romeo 4C features aluminium construction to keep weight to a 1,103 kg.

The A110 Première Edition is powered by a turbocharged 1.8-litre four-cylinder petrol engine, which develops 252PS.

The car’s power to weight ratio (228PS/tonne), plus a launch control function, enables the A110 to sprint to 100kph in 4.5 seconds. Its top speed is electronically limited at 250kph.

Limited to 1,955 examples – a nod to the year Alpine was founded – the A110 Première Edition was fully reserved within five days of going on sale.

Renault UK MD Vincent Tourette on dealers: 'We win together, or we lose together'

Renault UK MD Vincent Tourette on dealers: 'We win together, or we lose together'