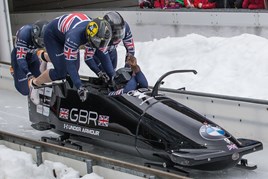 Lookers put five cars on ice for the British Olympic Bobsleigh team as it struck a deal to provide transport for the racers ahead of the 2018 Winter OIympics in PyeongChang, South Korea.

The AM100 retail group delivered three nine-seat Ford Tourneo people carriers, a Land Rover Discovery and an Audi A4 Estate to the team as part of an agreement which saw it become one of the team's key sponsors ahead of a busy period on the slopes.

With the UK lacking a dedicated ice track, the vehicles will form a vital part of the team’s summer training as they travel to locations at home and abroad to train on the ice, as well as their regular track and gym sessions at the team’s headquarters at the University of Bath.

The sponsorship agreement is part of Lookers’ ongoing support of local and national sport and will see its logo feature on the team’s race suits as well as the bobsleds themselves.

Lookers’ group marketing director, Heike O’Leary, said: “We are proud of all the sports teams and initiatives that we support around the country, whether it’s a local youth football club or, in this case, a team of elite athletes competing for the ultimate prize.

“With only a matter of days until the opening ceremony in PyeongChang, we wish both the men’s and women’s teams the best of luck.”

British Bobsleigh’s performance director, Chris Price, said: “We would like to take this opportunity to thank Lookers for its support over the last 18 months.

“These vehicles have allowed us to better transport our athletes to races across Europe, meaning that they have been able to travel together and in a greater degree of comfort.

“When you have athletes the size of many of those in our team, knowing that the squad will be travelling in comfort is a massive boost, particularly given that they face long journeys almost immediately after competing for their country.

“This has helped to further develop the fantastic team spirit we have here in the team, something that is vitally important as we travel to PyeongChang.”

Andrew Matthews, British Bobsleigh brakeman and 2014 and 2018 Olympian, said: “We are now confident of putting in a performance that will make the country proud in PyeongChang and I would like to thank Lookers for helping us in our preparation.

“We spend so much time on the road when we are competing and you cannot underestimate the impact that the support from Lookers has had on the squad as a whole.

"It has taken so much of the uncertainty out of our pre and post-race travel and it’s meant we can focus fully on doing what we do best.”