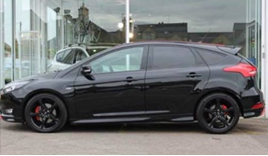 Arnold Clark has gifted a recently bereaved family a brand new Ford Focus ST-line after its intended recipient passed away ahead of its collection from the Glasgow dealership.

The Glasgow-based AM100 retailer’s chief executive, Eddie Hawthorne, gave the go-ahead for the generous car giveaway after Kevin Quinn passed away on March 3 following a three-year battle with cancer.

The Quinn family said in a Facebook post that Hawthorne had been “touched by this family’s pain” after discovering that Kevin had passed away ahead of the scheduled collection of his new car.

Hawthorne then advised the team at the retailer’s dealership on South Street, Glasgow, to make the gesture.

Family member Gary Quinn posted: “At the beginning of January Kevin Quinn posted this picture just after he had ordered this car.

“Today we received a call from Arnold Clark advising the car was ready for collection they had to be advised Kevin had sadly passed.

“We have just received a call back from Arnold Clark advising manager Eddie Hawthorn was again touched by this family’s pain he advised us that the car was built to the specifications requested by Kevin therefore the car was to go to his family and the bill to ford has been settled by Arnold Clark and gifted to Angela Quinn.”

Kevin’s Nephew Luke Quinn took to Twitter to share his gratitude to Arnold Clark. He said: “A massive thank you to @ArnoldClark for this gesture. My uncle passed away on Saturday and he was so excited for his car. There is some good people left in this word.”

Another family member, Joe Quinn, said via Facebook: “Absolutely amazed by this. Faith in humanity has been restored thanks to Arnold Clark. Not all businesses are run by heartless bean counters.”