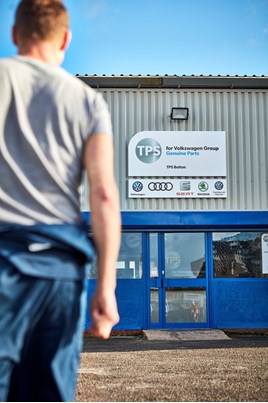 The Volkswagen TPS network announced its continued growth following the opening of new trade parts hubs in Bolton and Watford, with Birmingham and Cardiff operations now set to relocate to larger premises.

Inchcape's TPS Bolton hub opened in November 2017, and is housed in a 5,400sq-ft building with the capacity to stock up to 6,000 lines of products, which will in turn service a 600-strong customer base within a 25-minute radius of the centre.

A team of eight comprising of a supervisor, two warehouse people, an administrator and four drivers will staff the new centre.

There will be two transporter vans and two up! vehicles available to make between six and eight deliveries a day, which will also include a Saturday delivery service.

Bolton TPS’ centre manager, Matthew Sheldon, of Inchcape, said: “The new Bolton centre has made a huge difference as we can now reach a lot more customers than before and that gives us a great opportunity to grow the business.

“In previously servicing the region from our Oldham site we would experience difficulties getting across the M60 but the new location overcomes that obstacle and enables us to provide a much faster and on demand service.”

The centre has four van drivers and two express bike couriers, with the two wheeled capability adding to the centre’s fast on demand service as smaller parts are shipped out to customers in quick fire time.

Watford TPS’ centre manager Sean Willis, of Citygate, said: “We have only been open since January but we have already got off to a really strong start and are currently servicing around a 165-strong customer base.

“We have been able to create a good territory, right in the middle of the area we service with a lot of improvements including increased stock holding capacity and better speed of delivery.”

Birmingham and Cardiff centres are set to relocate to larger, purpose built, better-located sites, according to a Volkswagen TPS spokesman.

With the new and relocated hubs in Bolton, Watford, Birmingham and Cardiff, the number of centres in the TPS network is now at over 80 centres across the UK.