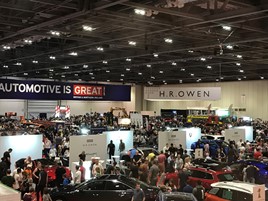 Lookers and HR Owen are among the car retail groups which generated sales leads from their presence at the London Motor Show as the event doubled in size for 2018.

Organisers claimed that the event, held at ExCeL London, had seen attendances rise by 29% to a record 32,310 visitors, with Lookers taking over 100 qualified sales leads for the Jaguar I-PACE EV, two months before it is due to go on sale.

“The star of the show was undoubtedly the all-new Jaguar I-PACE, which featured on our stand two months ahead of general release to the public, alongside the all-new Range Rover Sport PHEV which was drawing particular interest given its low emission charge status.

“We received over 250 qualified sales leads during the event with around half of them being for the Jaguar I-PACE.”

Ken Choo, HR Owen’s chief executive, said: “HR Owen has a deep connection with London stretching back more than 90 years, so I’m incredibly pleased that we were able to display such an astounding array of vehicles to London Motor Show visitors.”

Coming just seven weeks after the UK exits the EU, the event will champion Great Britain as a centre of automotive manufacturing, engineering and employment with an expanded Built in Britain zone showcasing the diversity of vehicles manufactured in the UK.

“We were overwhelmed by the public’s response to this year’s London Motor Show which is why we’re doubling the exhibition space in 2019 and expect to double the number of visitors,” said Alec Mumford, chairman of the London Motor Show.

“The UK is the second largest car market in Europe, with over two million annual car sales, so we would like to see more vehicle manufacturers engage with the British public at the 2019 London Motor Show as we enter the post-Brexit world.”