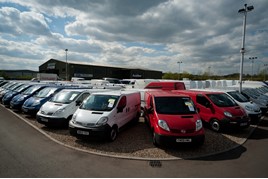 The app, called 'Where Am I Parked?', uses geolocation to establish the exact location where each of Anchor Vans vehicles was last parked, to reduce the labour time of the sales, driver and prep teams involved in finding vehicles.

With more than 500 vehicles parked on one three-acre site and a further 200 on an additional two smaller sites, it would previously often take a team member 15-20 minutes to locate each vehicle.

Simon Joyce, managing director of Anchor Vans said: "The development of our new app will revolutionise our day-to-day business. With over 700 vehicles parked across three on-site locations at any one time, locating specific vehicles has previously been a time-heavy challenge. Now, our sales, driver and prep teams can carry out their work in a fraction of the time, saving time, hassle and money."

The scale of Anchor Vans' operation requires 20 to 50 vehicles to be moved each day, with a 10 minute time for each move.

The new app aims to resolve this issue, giving all Anchor Vans employees the ability to quickly geolocate any van in stock, based on data showing where it was last parked.

Once the app has been bedded in, the team plan to feed its data through to the Anchor Vans customer website, where prospective buyers will be able to see where the vehicles in which they are most interested are located, saving them time too.

As well as launching the new app, Anchor is due to expand its existing site near Reading, with planning permission granted for the development of a former landfill site at Padworth.

The regeneration of this site would give the Anchor Vans valeting centre a new permanent home, and create additional space for transporters to unload away from the busy A4 - in addition to boosting the company's corporate social responsibility credentials.