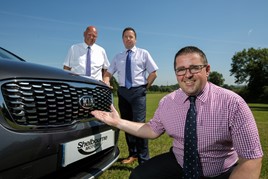 Kia is the first manufacturer to be confirmed for the family-owned dealer group’s new business, which is due to open at the start of next year.

The 50,000 sq ft site at Newry will create 60 new jobs and will have room for four new car showrooms. The site will also have new car handover bays, a lounge-style waiting area with cafe, a drive-thru service centre and a 28-bay workshop.

“Kia is a perfect fit for us at our modern, multi-franchise complex in Newry and will undoubtedly strengthen our position as one of Northern Ireland’s largest family-owned vehicle retailers.”

Shelbourne Motors was founded by the Ward Family in 1973. It currently employs over 130 staff at its nine-acre Portadown headquarters, where it operates Toyota, Renault, Nissan and Dacia franchises, as well as a used car supermarket, accident repair centre and valet centre.