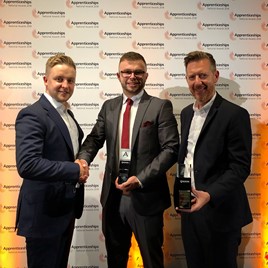 Lookers has won the North East round of the National Apprenticeship Awards for the second year running, with a ‘rising star’ award win for Lookers Nissan.

This is the second year Lookers has won the North East roundup, but a ‘rising star’ has been recognised within Lookers’ Nissan dealership.

This year, the ceremony introduced a ‘Rising Star’ category, allowing employers the chance to nominate members of their team for their impressive work and quick progression. Apprentice technician Brad Baker from Lookers Nissan collected the award.

Baker, who was awarded the Apprentice/Trainee Award in Lookers’ annual Excellence Awards ceremony earlier this year, said he enjoys “the rewarding aspect of helping customers get back on the road”.

Lookers also triumphed in the North East regional final of The Open University Macro category, demonstrating its commitment to ensuring its customers continue to receive the very best repair and maintenance support.

Lookers’ group qualifications manager Matt Clay said: “Creating young skilled technicians is pivotal not just for our business, but for the future of the motor industry.

“Our apprenticeship programme allows us to recognise and recruit talented team members who will help Lookers to grow through their fresh perspectives, aptitude and ambition.”

From the regional champions, a national judging panel will select the overall National Apprenticeship Award winners, to be celebrated at a national ceremony on November 28. The general public will be invited to vote on the overall winner for this category at national stages of the competition.