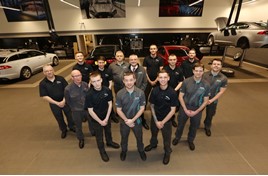 Taggarts Jaguar has increased its sales volumes by 60% since moving to a new site in Glasgow last year.

The Lookers Group dealership invested more than £7m in its new Hillington showroom, which is the biggest Jaguar site in Scotland.

The new dealership includes a 29,000 sq ft showroom split over two floors, with capacity for over 70 external display spaces.

In a year that has seen total car industry volumes down by more than 6% in the UK, Jaguar UK grew its share by 4% and Taggart’s Jaguar Glasgow grew its share within Glasgow and its surrounding areas by 9%.

The retailer’s parts department has grown its sales by 85% in the space of a year because of the increased retail and trade sales.

Overall staff headcount has increased by 45% at the dealership, with staff numbers up from 36 to 52 over the year.

Brian Herlihy, head of business at Taggarts Jaguar Glasgow, said: “It really is a brilliant time to be part of the Jaguar brand, especially when you consider that Lookers plc have invested so heavily in a world class facility here at Hillington.

“New product launches, like the brand new all-electric I-Pace and previously the E-Pace have set a supremely high standard for the industry and we are excited to be able to showcase them here in such a stunning retailer.”

As well as investing in its facilities, Jaguar Glasgow has been working hard to ensure that its customers have access to the very highest level of aftersales care.

Both have had very long, successful careers with Taggarts Jaguar having started as apprentice technicians.