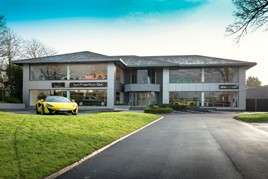 Sytner Group’s Rolls-Royce Manchester showroom has claimed the luxury car manufacturer’s dealer of the year award for its first 12 months of trading.

Rolls-Royce Motor Cars announced the results of the company’s celebrated Global Dealer Awards, which were held in Shanghai for the first time in the company’s history.

Torsten Müller-Ötvös, chief executive officer at Rolls-Royce Motor Cars, said: “I am proud to announce the results of our annual Global Dealer Awards.

Rolls-Royce motor cars are sold in more than 50 countries worldwide through a global network of 133 dealerships. 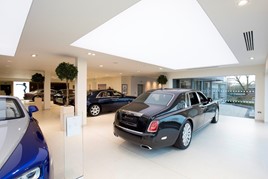 Last year Sytner Group officially-opened the doors of its new Rolls-Royce dealership as part of an 18,000 square-foot dual franchise development, including a McLaren Automotive showroom, in Wilmslow.

The two brands had been relocated to the new dealership facility from the AM100 number one retail group’s existing McLaren facility and Rolls-Royce showrooms on Canute Place and Manchester Road, Knutsford.

The two-storey showroom with specially commissioned Phantom scissor lift – designed to raise cars into position on the upper floor – and a bar and dining terrace for customers to enjoy during their visits.

Speaking at the time, Darren Edwards, chief executive of Sytner Group, said: “Sytner Group is very proud of our partnership with both of these iconic vehicle brands. This elegant location will be a true flagship for the Group, allowing us to continue delivering the outstanding service that we are famous for.”