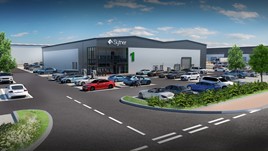 Sytner Group has secured a long-term lease on a 36,000 sq-ft building as part of plans to create a PDI and aftersales facility for its premium and luxury car franchises.

The deal is the first pre-let at the site and will see Sytner Group occupy the bespoke unit at Chancerygate’s Novus development in Knutsford, which is a short distance from the AM100 number one placed retail group's Bentley Manchester dealership.

Once completed, the facility will be used for pre-delivery inspection and general servicing of vehicles from Bentley and other high-end manufacturers, such as McLaren, Rolls-Royce and Land Rover.

Planning permission has been submitted for the unit which sits on a three-acre site allowing for extensive car parking and storage.

Novus is a 16-acre, 252,000 sq-ft industrial and warehouse scheme, sitting at the eastern end of the established Parkgate Industrial Estate in Knutsford. It is currently the largest development in Chancerygate’s portfolio.

Sytner Group’s head of property, Nigel Mills, said: “Chancerygate has a strong track record of industrial development across the UK and we have been impressed with their ability to cater for our specific needs at Novus.

“Novus was selected as it is ideally situated within close proximity of our dealerships and customer base. This new facility underlines our commitment to the Cheshire and North West region as we invest to improve the service provided to our existing and future customers in the area.”

Novus is strategically located in the North West in close proximity to Manchester and Liverpool.

The site was originally acquired by Chancerygate in June 2017 with work set to commence in mid-2019.

Chancerygate development manager, Chris Brown, said: “We’re extremely pleased to have secured such an established name in the automotive industry at one of our flagship schemes.

"This is an excellent start to the scheme and we are in detailed discussions with several other occupiers for pre-commitments on the other eight units we will be developing speculatively as part of phase one.

“The deal is testament to Sytner’s confidence in the location and our ability to deliver tailored development solutions for occupiers. This will be a real boost for the local economy as this alone will generate approximately 50 new jobs in the area.”