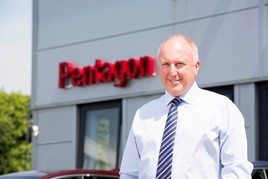 Pentagon Motor Group has added the Peugeot franchise at two locations, doubling its representation with the French manufacturer.

Pentagon’s site in Barnsley will become the main Peugeot dealership for the area with immediate effect, while its Lincoln multi-franchise site will also add the French brand from the start of September.

The group, which is part of Motus Group (UK) now operates 50 franchise outlets across 26 locations across the East Midlands, North West, South Yorkshire and Lincolnshire.

The Barnsley site onto which Peugeot is moving is a dual-franchise site.

A Pentagon-operated Nissan dealership is located there, currently running alongside Pentagon’s Fiat franchise operation for the area. However, following agreement on arrangements between the manufacturer and Pentagon, the dealer group is closing the last of its Fiat car dealerships on August 30.

David Lewis, Pentagon managing director, said: “We have watched Peugeot developing steadily in the UK, with new models in important sectors and strong credentials in the electric/hybrid sector.

“Its ascendancy is clearly shown by recent recognition such as its J.D. Power 2019 survey win as ‘Most Dependable Brand’, and its success in the highly important SUV sector with its win of ‘New Car of the Year’ at the Auto Trader New Car Awards.

“We see it as a manufacturer with the desire and ability to keep growing, and we are very happy to be in a position to join it on that journey. We already have Peugeot franchise locations in Burton and Scunthorpe, so these additions double our interests.”

Rob Truscott, Motus chief executive of operations in the UK, said: “We have always said we are looking to grow our business.

“Not growth at any price, but certainly where we feel we have the ability to invest in the right opportunities. In the relationship with Peugeot we feel we have such an opportunity, and are investing very willingly to support our activities and interests with the brand.”