Apprentices hailed as ‘the lifeblood’ of Arnold Clark 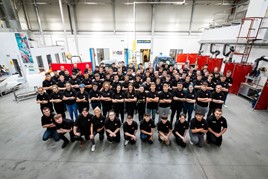 Arnold Clark chief executive and managing director Eddie Hawthorne has hailed the AM100 car retail group’s 835 apprentices as “the lifeblood” of the business.

The AM100’s second ranked franchised car dealer group welcomed a further 400 apprentices this summer and Hawthorne acknowledges that it is positive to see so many new faces entering the sector.

“Apprenticeships are the lifeblood of Arnold Clark and they provide us with young talent to drive our business forward and help meet the needs of our customers,” he said.

“We know young people could attend college, university or some other form of further education, but it’s not for everyone. Apprenticeships allow young people to start on a career path from day one and earn while they learn.”

In May AM reported on how the public accounts committee had criticised the Department for Education’s (DfE) “poor execution” of the Apprenticeship Levy after the number of new starters slumped by 26% in 2017/18.

The DfE revealed that there were a total of 375,800 new apprenticeships starters in 2017/18, compared to 509,400 during the previous academic year and the last full year before the Apprenticeship Levy was introduced.

But with Arnold Clark’s first intake of almost 150 apprentices starting in Scotland this week, and the rest starting in both Scotland and England over the next month, there is little sign of its promotion of the route to work suffering due to the Levy.

Suzanne Sherry, Arnold Clark Early Careers Manager, said: “This year Arnold Clark is welcoming more apprentices than ever before and this is a fantastic opportunity for them to begin a career in the automotive sector.

“It can be a huge change for these young people but we give them everything that they need to succeed, with expert training and mentoring every step of the way.

“We’re proud of our track record of helping apprentices go on to a successful career, both at Arnold Clark and within the wider industry.”

All apprentices will receive training as they work at one of Arnold Clark’s sites under the supervision of highly-qualified mentors.

After gaining their qualifications, apprentices have the opportunity to grow their skills further and develop their career. Arnold Clark currently employs 835 apprentices, with 91% of them going onto a full-time position with the Group.

While many of the apprenticeships offered are for traditional motor trade roles such as technicians, spray painters, body repairers and parts advisors, the group said that it also offered opportunities for apprentices in roles such as IT, engineering, customer service and business admin.

Arnold Clark opened its application process for 300 new apprentices back in March and has boosted the volumes it intended to take on in 2019.

At the time of the launch, some successful applicants from previous intakes shared their experiences of the scheme.

Third Year apprentice technician, Irahim Nselenya, said: “I’ve always been interested in cars so I couldn’t wait to start my apprenticeship. I’ve been supported throughout my journey by my peers, trainers and mentors. If you’re thinking about applying, I would say go for it. Many doors have been opened for me as a result of my apprenticeship.”

Coral McKissack is now a fully qualified technician working at Arnold Clark. She said: “I would tell anyone considering an apprenticeship that it is worth the time and effort you put in. It's not easy and can be very demanding at times, however, it is a hugely rewarding job.

"Even after your apprenticeship ends, the company is very supportive with progression and as long as you are willing to put in the effort, you’ll go far in this industry.”

The poll of the scheme's target audience of 16 to 24-year-old potential candidates found that 95% of apprentices would remain with the same company if they received a job offer after their training period.

NFDA director, Sue Robinson, said: “Our findings demonstrate the importance of investing in the workforce of the future."